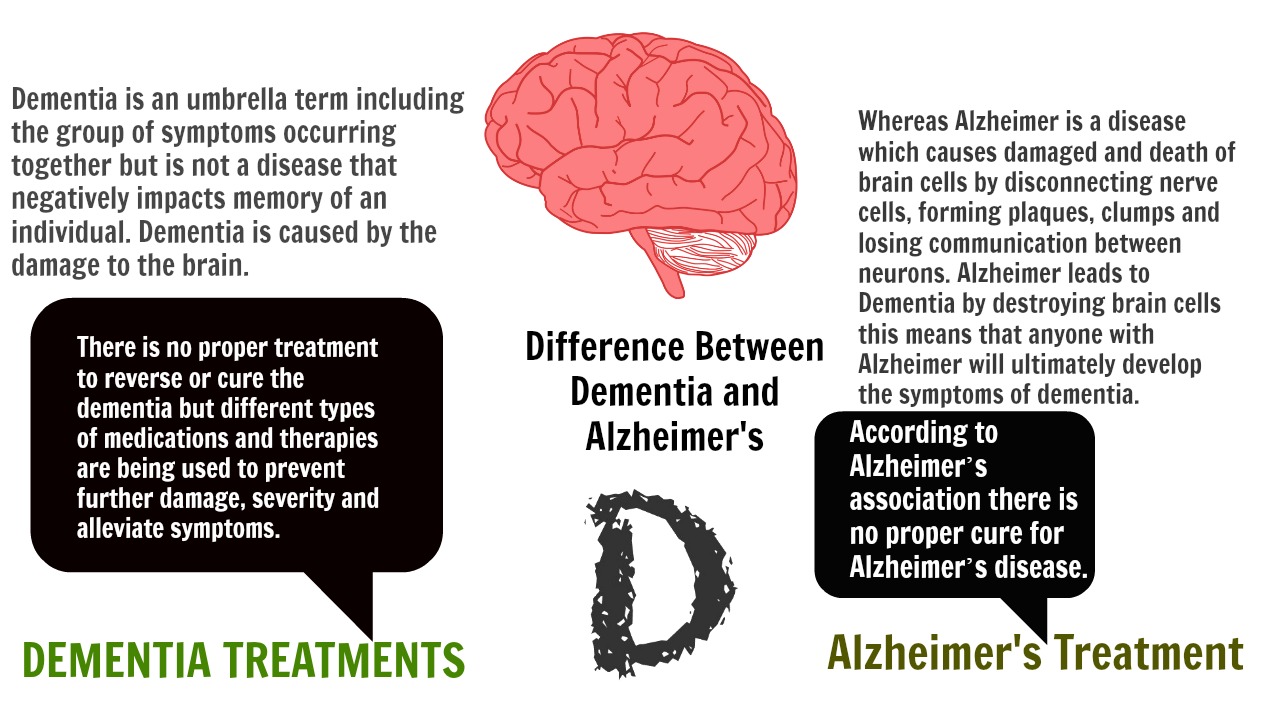 Summary: Difference Between Dementia and Alzheimer’s is that Dementia is an umbrella term including the group of symptoms occurring together but is not a disease that negatively impacts memory of an individual. Dementia is caused by the damage to the brain. Whereas Alzheimer is a disease which causes damaged and death of brain cells by disconnecting nerve cells, forming plaques, clumps and losing communication between neurons. Alzheimer leads to Dementia by destroying brain cells this means that anyone with Alzheimer will ultimately develop the symptoms of dementia.

Difference Between Dementia and Alzheimer’s Infographic

What is the Difference Between Mitosis and Meiosis

Alzheimer is an irreversible neurological disorder characterized by the death of brain cells eventually leading to memory loss and cognitive skills (thinking, learning, remembering abilities) of a brain are progressively destroyed. This disease leads to the formation of amyloid plaques (amyloid protein divides improperly forming a sticky beta-amyloid) and neurofibrillary tangles (primary markers of Alzheimer disease and are insoluble hyperphosphorylated tau protein) thereby disconnecting the neurons ultimately leading to their death.

There are three different stages of symptoms

These symptoms are mild at the start of disease but progressively become acute as time passes.

Early stages include forgetfulness of recent activities and troubled thinking.

Later and acute stages include Aphasia(inability to understand language) Dysphagia (difficulty in swallowing), uncontrolled excretory reflexes and Amnesia (loss of short and long term memory due to brain damage) are reported.

IS ALZHEIMER A GENETIC DISORDER?

Mutations in genes on chromosome 1,14 and 21 are also associated with the development of Alzheimer.

According to Alzheimer’s association there is no proper cure for Alzheimer’s disease. Moreover the progression towards disease cannot be delayed or stopped yet. Numerous researches and investigations has been done in this regard.

Difference Between Then and Than

Difference Between Mass and Weight

Difference Between Typhoon and Hurricane

Dementia is also known as Senility. Dementia is not a specific disease rather it is the combination of symptoms that affects brain’s cognitive abilities like thinking, remembering, language impairments, Ability to focus, visual perception and communicating i.e neurocognitive disorder. One of the symptom is paranoia (loss of touch with reality). It includes all those symptoms when brain cells stop working properly.

Symptoms are worsen gradually with the passage of time. Dementia includes combination of symptoms like memory loss with other impairments. It occurs due to physical changes in brain. It is the indicative of several other underlying brain diseases. The chances of having dementia increases with increasing age but it’s not the part of normal aging process. About 47.5 million people around the world are living with dementia.

Depending on cause some dementia can be reversed.

Depending upon the type of brain region which is damaged, dementia can be categorized in to two major groups:

CORTICAL DEMENTIA: In this type the part of brain known as cerebral cortex is affected which is responsible for memory and language. Alzheimer’s disease and Creutzfeldt-Jakob disease are two types of cortical dementia.

OTHER TYPES of DEMENTIA Includes:

VASCULAR DEMENTIA: It accounts for less than less than 10% of dementia. In vascular dementia the blood vessels are blocked or ruptured so that it might cause bleeding in the brain region or strokes due to which it was previously known as post-stroke dementia. It leads to inability of person to take decisions.

FRONTO TEMPORAL DEMENTIA: In this type of dementia the frontal and temporal parts of brain are damaged. These parts are involved in behavioral control, speech etc.

WERNICKE-KORSAKOFF SYNDROME: It is common in people with high alcohol consumption. It occurs because of vitamin B1 (thiamine) deficiency it can cause vision changes, Ataxia and badly affects memory.

MIXED DEMENTIA: such patients have mixed symptoms of Alzheimer’s disease and vascular dementia.

Majority of dementia are not inherited but we may inherit the genes that may increase our chances of developing any type of dementia as in case of vascular dementia the chances of diseases development increases many folds if a person has risk genes for CVD or stroke.

There is no proper treatment to reverse or cure the dementia but different types of medications and therapies are being used to prevent further damage, severity and alleviate symptoms.

DIFFERENCE BETWEEN DEMENTIA AND ALZHEIMER’S DISEASE

Dementia is an umbrella term including the group of symptoms occurring together but is not a disease that negatively impacts memory of an individual. Dementia is caused by the damage to the brain. Whereas Alzheimer is a disease which causes damaged and death of brain cells by disconnecting nerve cells, forming plaques, clumps and losing communication between neurons. Alzheimer leads to Dementia by destroying brain cells this means that anyone with Alzheimer will ultimately develop the symptoms of dementia. But not all the dementia are due to Alzheimer. There are many other factors that contribute to Dementia like Huntington’s disease, Parkinson’s disease, Creutzfeldt-Jakob syndrome etc. But Alzheimer is the major and most common cause of Dementia accounting for 60-80% of all Dementias.

Symptoms Difference Between Alzheimer’s and Dementia

The common symptoms of both Alzheimer and dementia are memory lapse, communication impairments and altered or reduce thinking power.

The risk for both Alzheimer and dementia increases with the growing age but it doesn’t mean that it’s the part of normal aging process i.e all old age people will have either dementia or Alzheimer’s disease.

Therefore it is important to know the difference between Alzheimer and dementia to seek medical advice accordingly. Furthermore, memory boosting exercises should be done regularly to improve memory and functioning of the brain. Such tasks include puzzles, physical exercise, quitting multi-tasks at one time, using brain boosting foods or supplementary aids, brain relaxing exercises etc.