Summary: Difference Between CD and DVD is that CD or also known as COMPACT DISC is small and portable round medium disc made of Molded Polymer used for storing data or information electronically. While DVD stores data, instructions, and information in a slightly different manner and thus achieves a higher storage capacity. 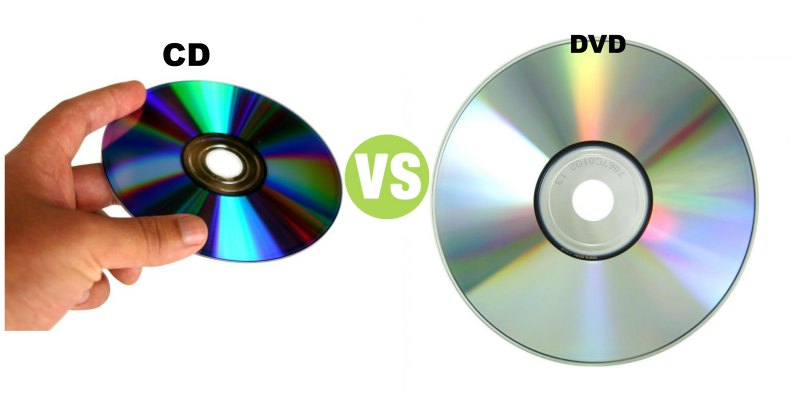 Although the size and shape of a CD and DVD are similar, a DVD stores data, instructions, and information in a slightly different manner and thus achieves a higher storage capacity. DVD quality also far surpasses that of CDs because images are stored at higher resolution. A DVD-ROM (digital versatile disc-read-only memory or digital video disc-read-only memory) is a high-capacity optical disc on which users can read but not write or erase. Manufacturers write the contents of DVD-ROMs and distribute them to consumers. DVD-ROMs store movies, music, huge databases, and complex software.

A DVD-ROM uses one of three storage techniques. The first involves making the disc denser by packing the pits closer together. The second involves using two layers of pits. For this technique to work, the lower layer of pits is semitransparent so that the laser can read through it to the upper layer. This technique doubles the capacity of the disc. Finally, some DVD-ROMs are double-sided.

A newer, more expensive DVD format is Blu-ray, which is a higher capacity and better quality than standard DVDs, especially for high-definition audio and video. A Blu-ray Disc (BD) has storage capacities of 100 GB, with expectations of exceeding 200 GB in the future. Blu-ray Disc drives and players are backward compatible with DVD and CD formats. Figure 6-25 compares the current storage capacities of DVD and Blu-ray media. Another high density format, called HD VMD (Versatile Multilayer Disc) potentially will contain up to 20 layers, each with a capacity of 5 GB. Current HD VMDs have capacities of 40 GB and more.

A mini-DVD that has grown in popularity is the UMD, which works specifically with the PlayStation Portable (PSP) handheld game console. The UMD (Universal Media Disc), which has a diameter of about 2.4 inches, can store up to 1.8 GB of games, movies, or music. Similarly, the mini Blu-ray Disc, which is used primarily in digital video recorders, stores approximately 7.5 GB.

Difference Between Motherboard and Chipset