Summary: Difference Between Mobile Computer and Mobile Devices is that A mobile computer is a personal computer you can carry from place to place. Similarly, a mobile device is a computing device small enough to hold in your hand. While mobile devices, which are small enough to carry in a pocket, usually store programs and data permanently on memory inside the system unit or on small storage media such as memory cards. 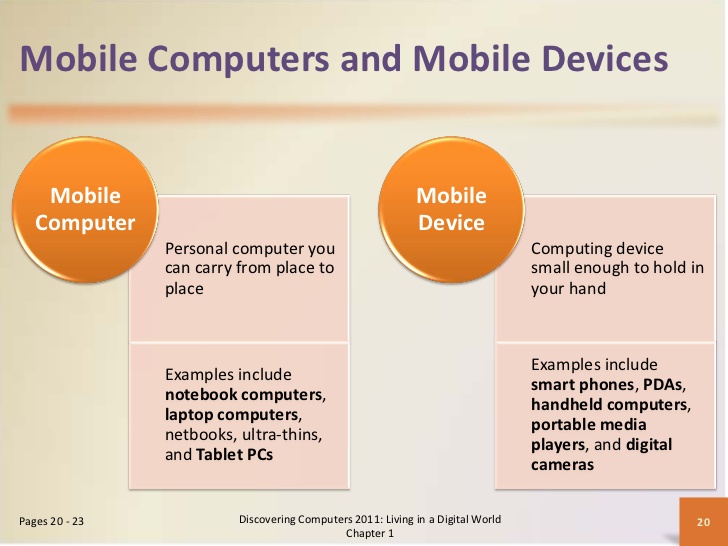 Resembling a letter-sized slate, the Tablet PC, or tablet computer, is a special type of notebook computer you can interact with by touching the screen with your finger or a digital pen. One design of Tablet PC, called a convertible tablet, has an attached keyboard. Another design, which does not include a keyboard, is called a slate tablet and provides other means for typing. Tablet PCs are useful especially for taking notes in locations where the standard notebook computer is not practical.

Mobile devices, which are small enough to carry in a pocket, usually store programs and data permanently on memory inside the system unit or on small storage media such as memory cards. You often can connect a mobile device to a personal computer to exchange information. Some mobile devices are Internet-enabled, meaning they can connect to the Internet wirelessly. Because of their reduced size, the screens on handheld computers are small. Popular types of mobile devices are smart phones and PDAs, e-book readers, handheld computers, portable media players, and digital cameras.

Offering the convenience of one-handed operation, a smart phone is an Internet-enabled phone that usually also provides personal information management functions such as a calendar, an appointment book, an address book, a calculator, and a notepad. In addition to basic phone capabilities, a smart phone allows you to send and receive e-mail messages and access the Web — usually for an additional fee. Many models also function as a portable media player and include built-in digital cameras so that you can share photos or videos. Many smart phones also offer a variety of application software such as word processing, spreadsheet, and games. Many smart phones have keypads that contain both numbers and letters so that you can use the same keypad to dial phone numbers and enter messages. Others have a built-in mini keyboard. Some have touch screens, and some include a stylus. Instead of calling someone’s smart phone or cell phone, users often send messages to others by pressing buttons on their phone’s keypad, keys on the mini keyboard, or images on an on-screen keyboard. Types of messages users send with smart phones include text messages, instant messages, picture messages, and video messages.

• A text message is a short note, typically fewer than 300 characters, sent to or from a smart phone or other mobile device.

• An instant message is a real-time Internet communication, where you exchange messages with other connected users.

• A picture message is a photo or other image, sometimes along with sound and text, sent to or from a smart phone or other mobile device. A phone that can send picture messages often is called a camera phone.

• A video message is a short video clip, usually about 30 seconds, sent to or from a smart phone or other mobile device. A phone that can send video messages often is called a video phone.

A PDA (personal digital assistant), which often looks like a smart phone, provides personal information management functions such as a calendar, an appointment book, an address book, a calculator, and a notepad. A PDA differs from a smart phone in that it usually does not provide phone capabilities and may not be Internet-enabled, support voice input, have a built-in camera, or function as a portable media player.

Difference Between Tablet and PDA

Difference Between Handheld Computer and PDA

Difference Between Mainframe Computer and Supercomputer

Difference Between Network and Server