What is the Difference Between Then and Than

Comparing Amounts, Distances and with Numerals

Difference in identity or kind

Adults other than parents

Teachers other than Pakistani

Dictionary Pronunciation of than

Word ‘than’ is known to be used before the 15th century in Bible proverbs.

From Middle English than, thanne, from Old English þanne, a variant of þonne, from gem-pro *þana, from earlier *þam, from ine-pro *tóm, accusative masculine of *to-.

Is Than a Preposition or a Conjunction?

According to US and British dictionaries than is accepted both as a preposition and as a conjunction.

When Than Connects Two Phrases or Clauses it is Conjunction

We should not work more than our strength

He is shorter than I am

When the Second Phrase is Elliptical it is used as Conjunction

Harry is taller than I

He is younger than I

Peter is faster than Harry is

He is shorter than me

John is smarter than me

When used after Hardly or Scarcely is Referred as Preposition

Than is also a Preposition when Numerals or Amounts are Compared

It takes more than 2 hours

More than 2000 gathered at park

Than is used as Preposition when followed by an Isolated Pronoun

Her story is different than his

More Examples of Than as a Conjunction

More Examples of Than as a Preposition

Usage of Than according to Dictionary

Represents you are a better swimmer than she is.

Therefore you are a better swimmer than her is a solecism.

Therefore they like you more than she is a solecism,

If it attempts to represent the previous sentence. It may be correct, however, if it represents they like you more than she likes you.

Some grammarians insist that whom must follow than (not who); although according to the above rule, who would be the “correct” form. Critics of this often cite this mandatory exception as evidence that the grammarian rule is logically erroneous, in addition to it being inconsistent with well-established usage. 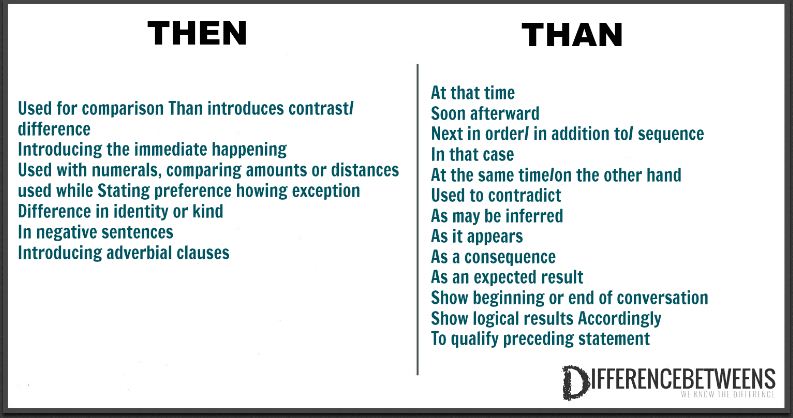 Next in Order or in Addition or Sequence

At the Same Time or on the Other Hand

As may be Inferred

As an Expected Result

Beginning or End of Conversation

Use to show Logical Result

Dictionary Pronunciation of Then

Then is known to be in use before the 14th century as it is clear from many verses of Bible.

Usage of “Then” according to Dictionary

Is “Then” an Adjective, Adverb, Noun or Co-ordinating Conjunction?

Then can be used as an adjective, adverb, noun and coordinating conjunction. It is adjective when it comes before the noun.

Examples using Then as Coordinating Conjunction

Examples using Then as a Noun

It is used as noun representing that particular time

Examples using then as an Adjective

It is used as Adjective when it belongs to Specific Prior Time.

Examples using Then as an Adverb

It is used an adverb showing subsequently or soon afterward.

Difference in identity or kind

Next in order/ in addition to/ sequence
In that case

At the same time/on the other hand

As may be inferred

As an expected result

Show beginning or end of conversation

From Middle English than, thane, from Old English panne, a variant of ponne, from gem-pro *pana, from earlier  *pam, from ine-pro *tom, accusative masculine of *to-.

From Middle English then (ne), than (ne), from Old English ponne, panne, paenne, from gem-pro *pan-, *pana-, from earlier *pam, from earlier ine-pro *tom, accusative masculine of *to-.

Used as conjunction and preposition.

USAGE of THAN in SENTENCES

Horse can run more quickly than a dog.

John is better athlete than I.

I am stronger than her.

You are earlier than usual.

I scarcely walked in the door than the commotion started.

USAGE of THEN in SENTENCES

He was happy then.

Since then I have been working hard.

People then believed in monsters.

He studied and then left.

Go to the corner then turn left