Summary: Difference Between Procedural Language and Object Oriented Language is that in a procedural language, the programmer writes instructions that tell the computer what to accomplish and how to do it. With a procedural language, often called a third-generation language (3GL), a programmer uses a series of English-like words to write instructions. While Programmers use an object-oriented programming (OOP) language or object-oriented program development tool to implement objects in a program. 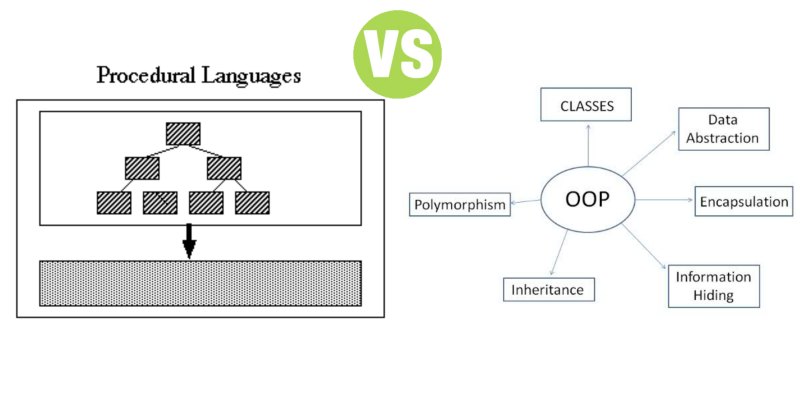 For example, ADD stands for addition or PRINT means to print. Many 3GLs also use arithmetic operators such as * for multiplication and 1 for addition. These English-like words and arithmetic symbols simplify the program development process for the programmer.

An interpreter reads a code statement, converts it to one or more machine language instructions, and then executes those machine language instructions. It does this all before moving to the next code statement in the program. Each time the source program runs, the interpreter translates and executes it, statement by statement. An interpreter does not produce an object program. One advantage of an interpreter is that when it finds errors, it displays feedback immediately. The programmer can correct any errors before the interpreter translates the next line of code. The disadvantage is that interpreted programs do not run as fast as compiled programs.

Hundreds of procedural languages exist. Only a few, however, are used widely enough for the industry to recognize them as standards. These include C and COBOL. To illustrate the similarities and differences among these programming languages, the figures on the following pages show program code in these languages. The code solves a simple payroll problem — computing the gross pay for an employee.

The process used to compute gross pay can vary from one system to another. The examples on the following pages use a simple algorithm, or set of steps, to help you easily compare one programming language with another.

The C programming language, developed in the early 1970s by Dennis Ritchie at Bell Laboratories, originally was designed for writing system software. Today, many programs are written in C. C runs on almost any type of computer with any operating system, but it is used most often with the UNIX and Linux operating systems.

COBOL (COmmon Business-Oriented Language) evolved out of a joint effort between the United States government, businesses, and major universities in the early 1960s. Naval officer Grace Hopper, a pioneer in computer programming, was a prime developer of COBOL. COBOL is a programming language designed for business applications. Although COBOL programs often are lengthy, their English-like statements make the code easy to read, write, and maintain. COBOL especially is useful for processing transactions, such as payroll and billing, on mainframe computers.

Programmers use an object-oriented programming (OOP) language or object-oriented program development tool to implement objects in a program. An object is an item that can contain both data and the procedures that read or manipulate that data. An object represents a real person, place, event, or transaction. A major benefit of OOP is the ability to reuse and modify existing objects.

For example, once a programmer creates an Employee object, it is available for use by any other existing or future program. Thus, programmers repeatedly reuse existing objects. For example, the payroll program and health benefits program both use the Employee object. That is, the payroll program would use it to process employee paychecks and the health benefits program would use it to process health insurance payments.

Programs developed using the object-oriented approach have several advantages. The objects can be reused in many systems, are designed for repeated use, and become stable over time. In addition, programmers create applications faster because they design programs using existing objects. Programming languages, such as Java, C#, F#, C++, and the latest versions of Visual Basic are complete object-oriented languages.

Object-oriented programming languages and program development tools work well in a RAD environment. RAD (rapid application development) is a method of developing software, in which the programmer writes and implements a program in segments instead of waiting until the entire program is completed. An important concept in RAD is the use of prebuilt components. For example, programmers do not have to write code for buttons and text boxes on Windows forms because they already exist in the programming language or tools provided with the language.

Most object-oriented program development tools are IDEs. An IDE (integrated development environment) includes tools for building graphical interfaces, an editor for entering program code, a compiler and/or interpreter, and a debugger (to remove errors, which is discussed later in the chapter). Some IDEs work with a single programming language, others support multiple languages.

Java is an object-oriented programming language developed by Sun Microsystems. When programmers compile a Java program, the resulting object code is machine independent. Java uses a just-in-time (JIT) compiler to convert the machine-independent code into machine-dependent code that is executed immediately. Programmers use various Java Platform implementations, developed by Sun Microsystems, which provide development tools for creating programs for all sizes of computers.

The Microsoft .NET Framework, or .NET (pronounced dot net), is a set of technologies that allows almost any type of program to run on the Internet or an internal business network, as well as stand-alone computers and mobile devices. Similarly, ASP.NET is a Web application framework that provides the tools necessary for the creation of dynamic Web sites. Using .NET and/or ASP.NET, programmers easily can develop Web applications, Web services, and Windows programs. Examples of languages that support .NET include C++, C#, F#, Visual Basic, Delphi, and PowerBuilder. The following sections discuss each of these languages.

Developed in the 1980s by Bjarne Sroustrup at Bell Laboratories, C++ (pronounced SEE-plus-plus) is an object-oriented programming language that is an extension of the C programming language. C++ includes all the elements of the C language, plus it has additional features for working with objects. Programmers commonly use C++ to develop database and Web applications.

Based on C++, C# (pronounced SEE-sharp) is an object-oriented programming language that was developed primarily by Anders Hejlsberg, Microsoft chief architect and distinguished engineer. C# has been accepted as a standard for Web applications and XML-based Web services.

Difference Between Macros and Functions

Difference Between Compiler and Interpreter