Summary: Difference Between Memory and Storage is that Memory consists of electronic components that store instructions waiting to be executed by the processor, data needed by those instructions, and the results of processing the data (information). While Storage holds data, instructions, and information for future use. 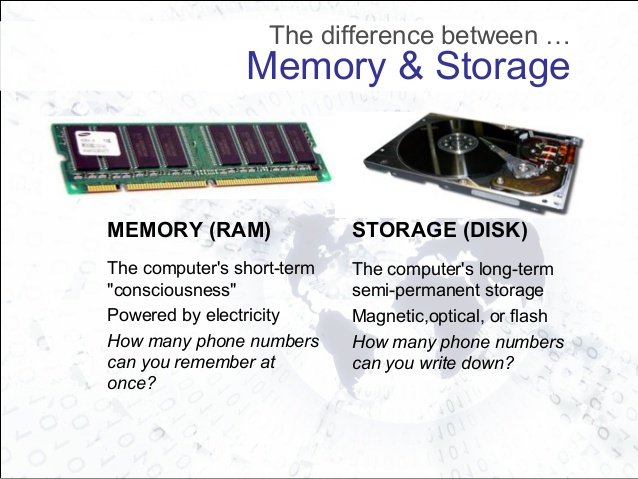 Memory consists of electronic components that store instructions waiting to be executed by the processor, data needed by those instructions, and the results of processing the data (information). Memory usually consists of one or more chips on the motherboard or some other circuit board in the computer. Memory stores three basic categories of items: (1) the operating system and other system software that control or maintain the computer and its devices; (2) application programs that carry out a specific task such as word processing; and (3) the data being processed by the application programs and resulting information. This role of memory to store both data and programs is known as the stored program concept.

A byte (character) is the basic storage unit in memory. When application program instructions and data are transferred to memory from storage devices, the instructions and data exist as bytes. Each byte resides temporarily in a location in memory that has an address. An address simply is a unique number that identifies the location of the byte in memory. The illustration in Figure 4-10 shows how seats in an opera house are similar to addresses in memory: (1) a seat, which is identified by a unique seat number, holds one person at a time, and a location in memory, which is identified by a unique address, holds a single byte; and (2) both a seat, identified by a seat number, and a byte, identified by an address, can be empty. To access data or instructions in memory, the computer references the addresses that contain bytes of data.