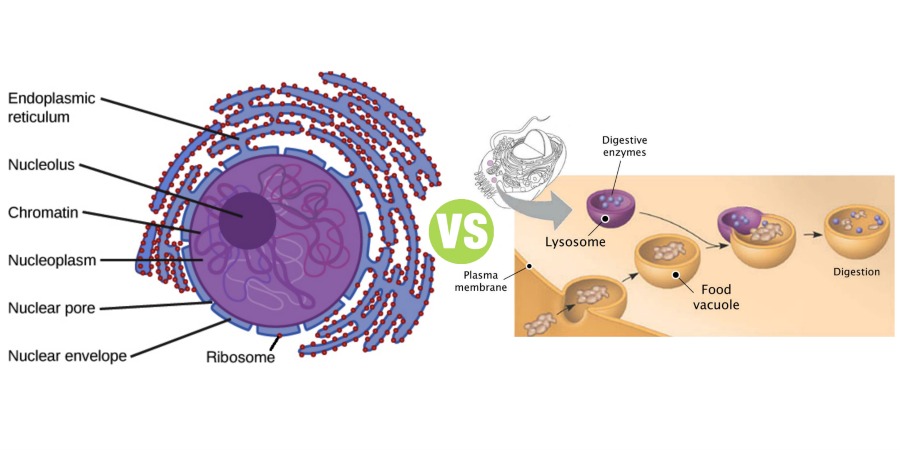 Ribosomes are the organelles without limiting membrane. These organelles are granular and small dot-like structures with a diameter of 15 nm. Ribosomes are made up of 35% of proteins and 65% of ribonucleic acid (RNA). RNA present in ribosomes is called ribosomal RNA (rRNA). Ribosomes are concerned with protein synthesis in the cell.

Ribosomes are of two types:

Free ribosomes are responsible for the synthesis of proteins in hemoglobin, peroxisome and mitochondria.

Lysosomes are the membrane-bound vesicular organelles found throughout the cytoplasm. The lysosomes are formed by Golgi apparatus. The enzymes synthesized in rough endoplasmic reticulum are processed and packed in the form of small vesicles in the Golgi apparatus. Then, these vesicles are pinched off from Golgi apparatus and become the lysosomes. Among the organelles of the cytoplasm, the lysosomes have the thickest covering membrane. The membrane is formed by a bilayered lipid material. It has many small granules which contain hydrolytic enzymes.

Lysosomes are of two types:

Primary lysosome, which is pinched off from Golgi apparatus. It is inactive in spite of having hydrolytic enzymes.

Secondary lysosome, which is the active lysosome. It is formed by the fusion of a primary lysosome with phagosome or endosome.

Lysosomes are often called ‘garbage system’ of the cell because of their degradation activity. About 50 different hydrolytic enzymes, known as acid hydroxylases are present in the lysosomes, through which lysosomes execute their functions.

Difference Between Secretory Vesicles and Lysosomes

Difference Between Peroxisomes and Lysosomes

Difference Between Mitosis and Meiosis

Difference Between Microtubules and Microfilaments

Difference Between Microtubules and Intermediate Filaments

3. Removal of Excess Secretory Products in the Cells